The First Questions…and the First Answers

What is a Mode?
What is the Treble Clef staff?
What’s a measure?
What are these things called notes?
What is a flat?
What is a Sharp?

Answer these questions and we are ready to begin composing.

What is a Treble Clef Staff? 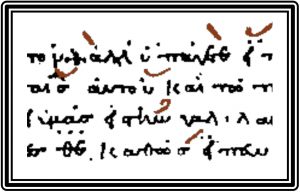 In the beginning there were no staves (plural for staff). There were Nuemes, symbols placed above the text to give general direction to the singer. (see to the right). Eventually this gave way to a system of lines and spaces on which notes were placed. Before too long we ended up with what we have today, a staff of five lines and four spaces, as seen to the left, on the top. The bottom left diagram 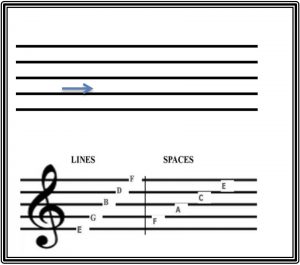 shows a TREBLE clef. The treble clef was NOT the first clef to be used – a “C” Clef was… but we will talk about that later. We are starting with the Treble clef because that is the most common clef in use today, along with the Bass clef, which we will see a bit later. There were only 7 notes originally – D,E,F,G,A,B, and C – and the Treble clef staff has these notes on its lines and spaces as you see above. We are almost ready to start composing… just a couple more items to briefly cover.

What is a Mode?

Modes were the first collections of notes. Each Mode started and ended on a certain note. Dorian Mode, the very first church mode began on a “D” and ended on a “D”.  The very next church mode was called the Phrygian Mode and started on an “E” and ended on an “E”. Eventually there were seven modes. They didn’t all happen at once, they came into being as the composer’s needs expanded. For now, we are only going to look at the Dorian Mode for our compositional exercises.

Most simply put, a measure divides the staff into sections, each of which will contain notes. Our first note we will be using is the WHOLE note. Let’s assume that it is called a WHOLE note because it takes up the WHOLE measure. So there will only be ONE whole note in each measure.

Notes are those symbols we put on the staff to tell the instrumentalist or the vocalist what to sing or play. They serve two purposes. Firstly, they tell us what pitch to play or sing. This is determined by WHERE on the staff the note is placed. Secondly, they give us rhythmic information by being of different lengths so the instrumentalist or vocalist knows how long to hold that pitch.  Notes will be of a couple of varieties: a hollow oval, a hollow oval with a stem, a sold oval with a stem or a solid oval with a stem and a flag. We will explain all of these later. Here is a picture that shows what these notes will look like as well as their related rests… we will cover rests in more detail as well, when it is time. 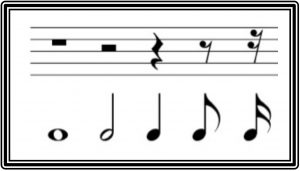 From the left, moving to the right, the names of the notes are as follows: 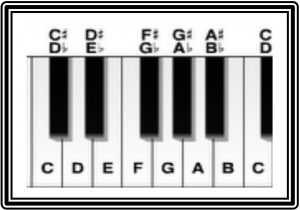 We will be starting using only the WHOLE note. Below is the Dorian Mode, our first mode/scale. The notes we see comprising this mode on the TREBLE clef staff are D,E,F,G,A,B,C, and D. The vertical lines separating the whole notes are called “Measure” or “Bar” lines, and the space between these lines are called “Measures” or “Bars”.

It wasn’t long before the Medieval composers modified this mode a bit. The changes they made were due to several factors, primarily (pure conjecture here) due to what sounded “right” to their ears. One of the first modifications had to do with the note “B”. B has the distinction of being able to form a tri-tone with another note of this mode – F. This interval was deemed unacceptable, so a change was called for. Medieval theorists opted to flat the B. I suspect one reason was also that there being a half-step between B and C gave the impression a musical phrase was resolving to C, making it sound as if we are in the a different mode – or (to us modern musicians) making it sound as if we are in C Major vice being in a D minor tone-center. So we add a Bb to this mode. And this modification brings the entry of flats into our music world. Flats lower a note by ½ step. On a piano, to “flat” a note, you move LEFT one adjacent key. Notice where “B” is located on the keyboard…. Bb is the black key immediately to the left of B. 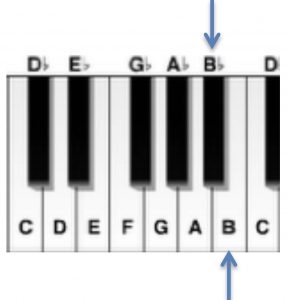 Here is our mode, with the Bb added.

Next, the Medieval composers addressed the problem of how to give a musical phrase or a composition that “Now I’m done” feel. They needed something that would let the listener know that we are finished. This has everything to do with how to approach the final note (they even called this note the “Finalis”) – in this mode –the Finalis is the D. Using the C natural to a D as you see above, doesn’t give that “I’m done” feel. Medieval composers decided that they would approach the Finalis in one of two ways – from a step above (from an “E” stepping down to the “D”) or from a half-step below (from a C# stepping up to the “D”). So now we need to add a C# to our mode… Now we are introduced to “sharps” – which raises a note’s pitch ½ step. See the graphic below. When we “sharp” a note on the piano, we move to the next immediately adjacent key TO THE RIGHT. So a “C” to a “C#” means we move to the black key immediately to the RIGHT of the “C” key.

Here is the completed version of the Medieval Dorian Mode:

Time to get to work. We now have a foundational understanding of the Treble Clef, Whole notes, measures, flats, sharps and how to place the notes we want on the Treble clef. We are going to write our very first melody using some the very first principles from the Medieval era. They called this first melody the “Cantus Firmus” meaning “Fixed Melody”.

And….. this is where our first Master Class begins – writing and harmonizing a Cantus Firmus in a minor key and in a major key.

To get any-time access to Mr. G, view group-exclusive resources and exercises, take part in weekly challenges, and connect with other Emerging Composer students, join our members-only Facebook Group today!

Check Out The Group

Check Out Our Podcast

Are You a Music Nerd? 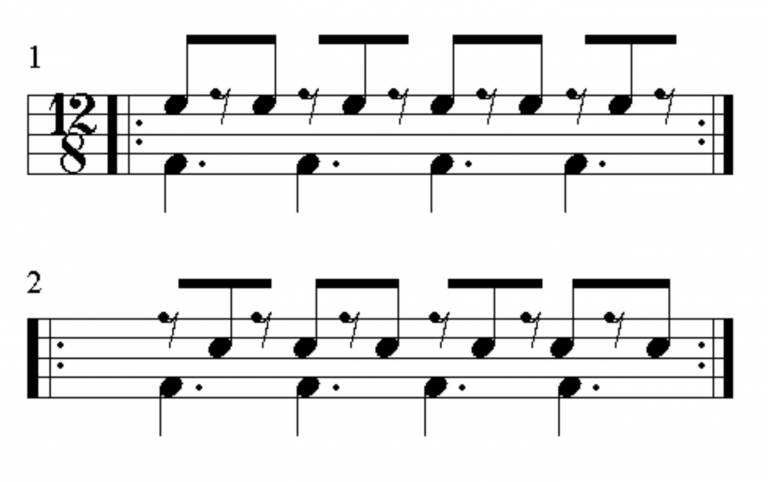 Greetings and salutations – this is Mr. G and in this short blog post I want to address a little topic that you’re going to

Why Palestrina? Why Counterpoint?

Why is a concept born out of a 16th century composer still relevant today? Why should we try to understand at least a LITTLE about

Benediction: In the earliest days of the church, there was no “Protestant” or “Catholic” in the denominational sense. There was just “Church”. There were five